It's an honor to have Sharmin as my guest writer today.
Sharmin, is a freelance writer and stylist based in Dubai. Her work has appeared in several magazines, with a focus on health, beauty, travel and the culinary arts. She has published more than 200 features till date. Her passion for food from Assam, where she hails from has led her to create the Assamese Cuisine And Recipes fan page on Face Book, which currently boasts over 12500 members. She also enjoys travel and photography .
I first met Sharmin through my blog .Few mails later realized apart from our love for Assamese Cuisine we also shared a common 'Shillong Connection'. It was then that i came across her popular fan page on Face Book .On asking her that what inspired her to start this page her answer was - away from Assam ,and with no access to any Assamese cookbook ,I realized that there was no barely any resources on the web on Assamese food and with the modern kitchen in use, many traditional recipes were no longer used.The page was created to show case our wonderful cuisine to the world and to preserve some of out ethnic recipes for generations to come .I believe, food connects us to our culture, It reflects our history . It is is everything we are .Since than she has my greatest admiration for her work and for the person she is.Today she shares with us this wonderful
photo feature and recipes related to Bora Saul , an integral part of Assamese Cuisine. Thank you Sharmin .

Bora Saul, a variety of sticky rice found in Assam, plays such an important role in Assamese culture that it is not surprising to find many festivals and traditions revolve around this particular rice. Bora rice is believed to have been introduced to Assam by the Ahoms. During the Ahom reign in Assam, a sticky rice mortar was made by adding Egg and Black Lentils to mortar materials. The resulting material was used in Ranghar (meaning Amusement House), a double-storied pavilion located in Sibsagar, Assam and many other structures. The grains can still be found in its original form even after hundreds of years of its construction.

Types
There are over forty types of sticky or glutinous rice in Assam. They are classified into two groups, Bora and Chokuwa, based on their Amylose and Amylopectin content, starches responsible for their sticky quality. Birain is also another class of glutinous rice, popular in Barak valley of Assam. This group of rice is called glutinous in the sense of being glue-like or sticky and not in the sense of containing gluten. They range from Black, Red to White. Popular varieties of Bora are, Bogabora, Johabora, Rangabora, Kolabora and Rupahibora.

Uses :No Assamese festival is complete without snacks made from Bora Saul. The rice is ground to make rice flour.This flour is then made into snack items called Pitha , which are an integral part of the festival called Bihu .Snacks such as Hurum, a type of puffed rice ,Cheera a type of beaten flat rice and Mah Korai ,a combination of black lentils ,sticky rice grains,sesame seeds and nuts made fropm Bora Saul ,Sunga Saul ,anothetr Assamese favorite ,are all an inevitable part of Assamese festivals.

Sticky Rice is also served as dessert, where cooked sticky rice is combined with sugar or jaggery and curd made from buffalo milk. In certain parts of Assam it is eaten for breakfast with sugar and curds or mustard oil and salt.
It is also used for preparation of indigenous rice beer. The thick, milky alcohol can be enjoyed with a meal or by itself. It is said to have medicinal and curative values. It is also offered to deities by certain tribes and is an essential part of their certain religious and cultural ceremonies.
Recipes
1 : Maah Korai
Ingredients
1 cup White sticky rice (Bora saul)
½ cup whole black gram (Mati dail)
3 tbs white Sesame seed
1 tbs grated ginger
1/2 cup peanuts
1/4 cup chopped toasted coconut bits
Salt, to taste.
Dry roast the ingredients

until soft .
Drain the excess water and

grind the
rice to a fine powder.
Sieve, cover with a damp

cloth and
keep aside
Toast the sesame seeds and

crush them
while still warm.
Mix the sesame seed with

and
spread it in sweeping motion

to form a
disc of roughly 4"diameter.
Sprinkle sesame and jaggery mixture in
the center. Roll into cylindrical shape.Move it to the side of griddle.Remove when crisp.Serve with tea.Black sticky rice (kola bora saul) can be used to make the above recipe, although not common.
For more recipes from her you can check here too ... Easy Eats .

UPDATE :Because many readers wanted to know if Bora Saul is similar to Thailand Sticky Rice ,Sharmin sent me this picture where the similarity is quite evident .I am adding same picture to the post . 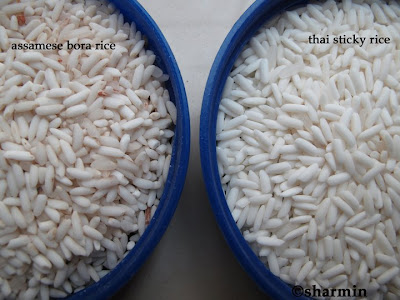 Please Don't Use Images Without Prior Permission

This work is licensed under a Creative Commons Attribution-NonCommercial-NoDerivs 2.5 India License.